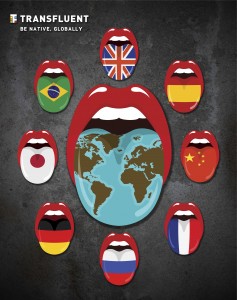 Let’s say you’re a rock star, an owner of an international business, or simply famous for some peculiar reason.

You tweet – of course – because it’s a great way to engage your fans around the world. But, because you do this only in English, you are missing the opportunity to involve non-English speakers – that’s 5 billion people.

What if, with absolutely no additional effort, you could also tweet in fluent Spanish, Portuguese, German, Japanese and Chinese? Wouldn’t your fans just love to be addressed in their native language? That’s exactly what the Red Herring Award winning technology company Microtask has seen; one third of their followers seem to simply prefer their French tweets (@microtask_fr).

Transfluent connects you and your Twitter account with 15,000 professional native translators who are ready to translate your messages in near real-time into more than 60 languages, 24/7. With our automated solution you can not only better reach the millions of Twitter users who don’t speak English as their native language, but soon you’ll also be able to effortlessly address your 250 million Chinese speaking audience on Sina Weibo, which already has more users than Twitter!

Simply connect to our service, select your target languages and you will be tweeting in tongues – hassle free – in no time! Charged by the word, no strings attached.