Have you talked to the world lately? 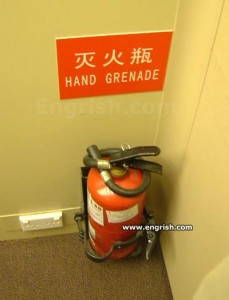 Imagine you’re a rock star, sunning yourself on the deck of your megayacht in the South China Sea. Margarita in one hand, smartphone in the other, the world at your feet.

Your agent has been nagging you to put in some work promoting your new album, so you fire off a quick tweet to your army of loyal followers. As the retweets roll in you congratulate yourself for mastering the art of self-promotion. You look up at the lights of Hong Kong on the horizon and it hits you. Why aren’t you talking to them as well?

As we’ve mentioned before, multilingual tweeting can really help get your message across. Whether you’re a celebrity or in business, or you just want to be heard, the key to the new global economy lies in mastering the art of global communication.

But before you order another margarita and set to work running your tweets through an automatic web translator, you might want to check out just how confusing – and potentially disastrous – the results could be.

The big problem with machine translation is its lack of sensitivity. For example, machine translators don’t understand jokes, puns or idioms very well. This means that your carefully-crafted tweets may not make sense, or worse, come to mean something completely different.

Preserving meaning in translations between English and Chinese is notoriously difficult, even for humans. It’s no surprise the machines can’t keep up. Unfortunate translations have inspired everything from memes to academic discussion. So how can you make sure a mistranslated tweet doesn’t make you famous for the wrong reason?

For example, say you wanted to translate the English phrase ‘like father, like son.’ After feeding the phrase into a popular online translator I was given 父亲一样，喜欢儿子, which has the literal meaning ‘His father, like a son.’ Not only is the translation confusing, it is also unnecessarily long. This could be a pain if you’re trying to keep to Twitter’s 140 character limit. The most literal translation of ‘like father, like son’ in Chinese is 有其父必有其子, which simply means ‘the father is like the son.’ But if you really want to be clear and concise, the phrase you need is 虎父无犬子, or ‘a tiger does not father a dog.’ This version, which a human translator would use, retains the original meaning, uses fewer characters, and has a far more poetic feel than the cold, clunky machine translation.

When it comes to fast, accurate, culturally sensitive translation, nothing beats the power of the human brain.

Now for a quick commercial break: At Transfluent, we use over 15,000 human brains to translate messages into more than 60 languages. By linking your Twitter feed with our automated, human-powered system, you can combine the speed of a machine translation with the accuracy only a human can provide.

And what’s more, you can do it all from your yacht.