If a lion could speak to us, would we understand him? 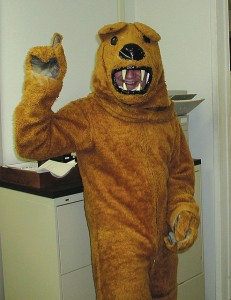 People love a good language myth. The idea that Eskimos have 50 words for snow has circulated for years, despite being completely untrue. Myths like this seem to be based on the idea that language comes from the differences in our cultures, rather than in what they share. One language myth that comes up again and again is the idea of untranslatability.

The net is filled with lists of untranslatable words and concepts, but the truth is that while there may be words that don’t translate readily – especially using a machine translator – a skilled human translator can always get the meaning across. If a word were truly untranslatable, there would be no way to even explain it in another language. As the (slightly deranged) philosopher Ludwig Wittgenstein once wrote: “If a lion could speak to us, we could not understand him.” My point is that while language may be a core part of our identity and even affect the way we think, our ideas are still fundamentally human and translatable.

One particularly pleasant example of a supposedly untranslatable word is the Danish word “hyggelig,” which can be heard in many parts of Scandinavia. Machine translators tend to render it in English as “nice,” but while that is technically accurate in the most basic sense, there’s a whole lot more to hyggelig than that.

Have you ever sat around a campfire with your closest friends and felt a wave of peaceful coziness wash over you? That’s hyggelig. But as well as describing an emotion, there is also an aspirational sense to the word: hyggelig is something to strive for. Anything that may lead to a feeling of hyggelig is itself hyggelig.

The easiest way to explain this is to look at the word’s origin: hyggelig comes from the Old Norse “hyggja,” meaning to believe, to wish or to intend, and “huggan,” meaning care, consolation and comfort. Taken together, these Old Norse concepts signify a warmth towards the whole of humankind, which might be rare in today’s dog-eat-dog world (especially when stuck in traffic) but which is worth striving for.

Goodwill to all of humankind is a little more than just “nice.” While there is no one English word that reflects every facet of hyggelig, it can still be translated: A sensitive translator can pick from the many English words that correspond to hyggelig feelings. By using a phrase made from words like ‘cozy,’ ‘warm’ or ‘welcoming,’ a translator can capture the sentiment of hyggelig.

This is where the fundamental difference between human and machine translators lies: while machines might be able to provide a literal translation that expresses one part of a complex, emotionally nuanced concept, it takes a real human – with real feelings – to see and accurately translate the whole picture.