Happy birthday Transfluent: everybody can sing together now

Like many people in our increasingly multicultural, globalized world, I have always been fascinated by how different countries and cultures communicate with each other. For years now, I have focused on how technology can make this easier.

In this respect, one year ago today, the world changed for the better. Transfluent was launched at TechCrunch Disrupt 2011 with a mission to remove language barriers from business marketing and communications. Using Transfluent, all businesses, small and large, would be able to broadcast messages and engage in dialogue with their customers in any language. No longer would people who speak less popular languages be excluded from the conversation. 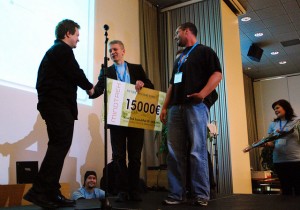 As you might have noticed, we launched Transfluent with sky-high ambitions. We want Transfluent to be the world’s leading online translation provider; an industry we believe will soon be bigger than traditional translation. If we succeed, Transfluent will generate billions of dollars of revenue. More importantly (not that making billions of dollars isn’t important), it will make the world a more connected place and forever change global business.

It has been an amazing first year. We started by offering translations for Twitter feeds, but then quickly launched services for Facebook, WordPress and mobile applications. In the last 12 months Transfluent has won awards, raised a million dollars of funding and most recently opened offices in Singapore and New York.

Today Transfluent is serving a growing number of customers, but we are just getting started. It is clear that any company that wants to do business on a global scale and use social media effectively must communicate in multiple languages. Not just broadcast news, but also engage in dialogue with customers.

Expect big news from us in the near future – we have amazing things in the pipeline. In the meantime please keep us in mind for your translation needs. Whether it’s a social media feed or a good old fashioned brochure, we’ll take care of it. We can do brand-checking, proofreading and even translate books. The beauty of a system based on professional human translators is that there’s really nothing we can’t do!