Melon hats and fixed ideas: what Asterix can teach us about good localization 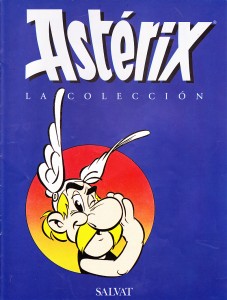 As we’ve discussed on this forum before, while almost everything can be translated, some things don’t translate very well. Often this occurs when idea or image relates to the basic parts of a language itself: the way it sounds spoken aloud or the way words are spelled.

The most obvious examples are puns, which can be a nightmare for translators. Word play that’s built around similar sounding words or words with multiple meanings is unlikely to work in a different language, where the equivalent words don’t sound the same or have the same shared meanings. In fact, this blog post will certainly cause some headaches when translated to languages other than English!

That’s why it’s important to give translators some freedom. Although it’s desirable to have something translated as accurately as possible – especially when the creator has worked hard in perfecting it in the original language – sometimes it’s best to let translators use their own knowledge to create something that’s different, but true to the spirit of the original.

The best example that I can think of (and something which I am personally fond of) is the French comic Asterix the Gaul. Asterix has been incredibly popular around the world for generations, and has been translated into over 100 languages.

This presents a problem because a lot of the humor in Asterix is based around puns. Translators have been forced to come up with some famously inventive solutions.

In French, Obelix (Asterix’s portly friend) has a little dog called Idéfix (from the idiomatic phrase idée fixe, meaning “fixed idea”). There’s no equivalent word in English, and you can hardly name a dog ‘Fixed Idea.’ So in English, Asterix’s dog is called Dogmatix: simultaneously a dog pun and a neat translation of “fixed idea.”

Sometimes a translation can even surpass the original, while still remaining faithful to its intent. In Asterix in Britain there’s a joke about the way the British speak that comes down to the fact that the French words for “bowler hat” feature the word “melon.” This pun obviously doesn’t exist in English, but the translators came up with this instead:

Shopkeeper: Oh, so this melon’s bad, is it?

The pun here is on the multiple meanings of “rather” (in English used as an idiomatic expression meaning “indeed”). It’s still a joke about British slang (and melons, since “old fruit” is a typically English term of endearment), and it’s funny in a way that a literal translation wouldn’t be. Asterix’s creator Goscinny allegedly liked it so much he said he wished it was in the original.

A good translation service responds to the tone and style of a piece, as well as its meaning. This is particularly relevant to social media, where the way something is said can be as important as the content. As long as you have a good understanding of a text’s message – what it’s really trying to communicate – it’s better to be creative, rather than dogmatic about it (as Asterix’s dog would testify).