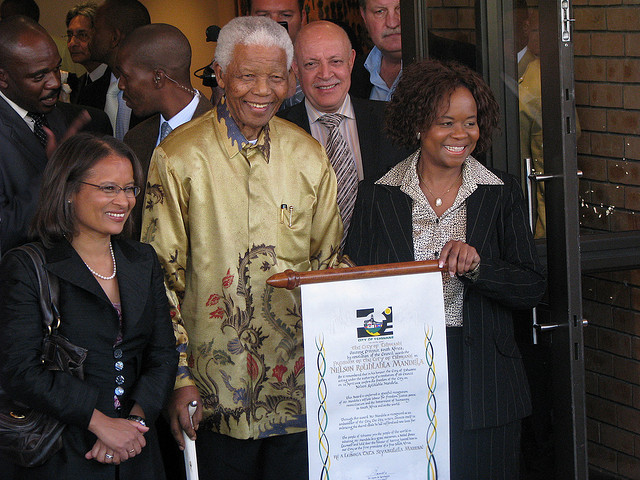 “What counts in life is not the mere fact that we have lived. It is what difference we have made to the lives of others that will determine the significance of the life we lead” – Nelson Mandela

Nelson Mandela, who passed away on December 5th, 2013, was a prominent figure in the fight for equality and peace, both in South Africa and around the world. He was a revolutionary and leader during the apartheid segregation era, as he led powerful but peaceful protests against the unjust policies and racism in general. Apartheid finally ended in 1993, and Nelson Mandela, along with then South African President F.W. de Klerk, won Nobel Peace Prizes for their efforts. In 1994, Nelson Mandela became the first black president in South Africa’s history.

Nelson Mandela has always called for global peace and an end to racism. In 2008, he asked the new generation to help him. He placed in our hands the responsibility and moral obligation to right the world’s injustices.In 2009, Nelson Mandela International day was launched in recognition of his birthday on July 18th. This day is a celebration of Mr. Mandela’s life and legacy. The message behind Nelson Mandela Day is simply that each individual has the ability and responsibility to change the world for the better.

We at Transfluent understand the importance of Mr. Mandela’s words and vision. The world is a diverse and culturally rich place, but communication and cultural differences divide groups of people too often. While we primarily create services that improve global businesses, we also aim to remove barriers that separate people of different backgrounds and languages. We bridge the language gaps among people through the power of understanding. We want to follow Mr. Mandela’s desire to make a difference in the world.

Nelson Mandela followed three rules throughout his life, which he did at great personal sacrifice:
1. Free yourself
2. Free others
3. Serve everyday

We challenge you to follow these three rules and serve someone in your community today!

For more information on Nelson Mandela, check out these websites:
http://www.nelsonmandela.org/content/page/faqs
http://www.mandeladay.com/content/landing/What-is-Mandela-Day.