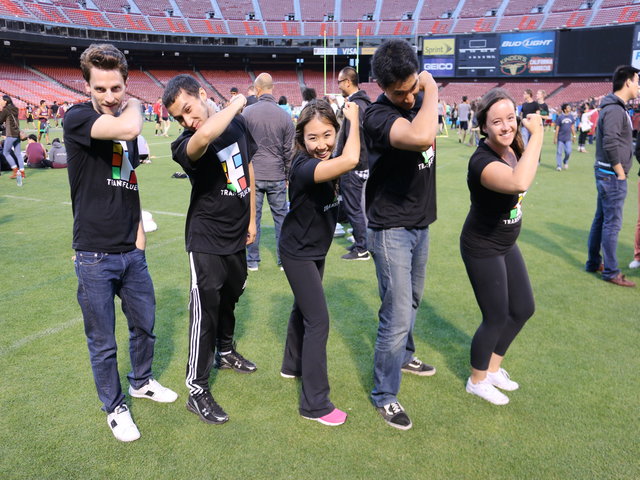 On Wednesday, July 16th, Transfluent attended the annual Tech Carnival, which was hosted by Silicon Valley Sports League. The event was held at Candlestick Park in San Francisco and consisted of various carnival games, such as inflatable jump houses, rock climbing, and mechanical bull riding. In addition, teams of the Silicon Valley Sports League were competing for a trophy inside Candlestick Park itself.

We were in charge of mini-golf, which was a hit with everyone, especially the kids. We had three different holes, each with their own challenge. The first required a hole in one to receive one of our Transfluent beanies. For the second hole, we made things interesting by placing cheeseburgers down on the green as obstacles to putt around. If a player hit one of the food items, they would have to eat them. For the last hole we gave away candy to everyone who played. We held a long line throughout the night at our second hole; It seemed like the cheeseburger challenge wasn’t such a bad idea!

In addition to working the mini-golf area, we all got a chance to actually step on the field of Candlestick Park. This was a very rewarding and memorable experience, because this historic park will soon be demolished in the near future. Candlestick Park was the home of the San Francisco Giants for 40 years and the San Francisco 49ers for 42 years and the site of the Beatles’ last concert. The Giants moved to AT&T Park in 2000, while the 49ers will soon move to the new Levi’s Stadium in Santa Clara, CA later this year.

Overall, Tech Carnival was a fun event. We were able to network with some interesting people, experience the the excitement that comes from being at a carnival, and see Candlestick Park one last time.