Linguistics at the Movies: Arrival 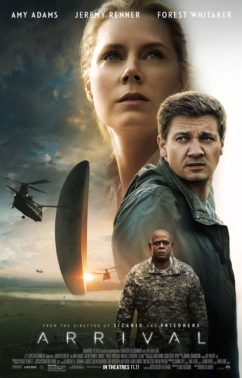 Movie reviews are not something we normally feature on the Transfluent Blog; however, this week we’re going to make a notable exception for the movie Arrival. This science fiction film will surprise and delight linguistics scholars and fans with its thoughtful questions about communication, context and the nature of language.

It is not your typical scifi romp. No monuments are toppled, there are no high-flying chase scenes or laser guns. Instead, Arrival delivers a thought-provoking, mind twisting story with a deep emotional core.

Amy Adams gives a moving performance as Louise, a linguistics expert brought in to make first contact with an alien race. The creatures, known as heptapods, interact with Louise and a team of scientists via an invisible barrier where we can only see part of their squid-like forms.

Many of the film’s visual cues foreshadow one of its underlying themes, the importance of context. In one of the opening shots, for example, the camera focuses on a white and grey texture. It could be anything, from cloud formations to a microscopic view of a tiny particle. Until the camera pulls out to reveal the entire picture (the underside of a building structure) we cannot be sure of what we’re seeing.

Louise’s attempts to communicate with the aliens are much the same. Without context, how can we hope to understand each other? The government pushes her to ask the heptapods why they came to Earth. She carefully explains why it is not such a straight-forward question as it may seem. Do they, for example, even understand the nature of a question?

Eventually she makes a breakthrough which leads to the movie’s most pivotal moments (which we won’t spoil) by exploring what linguists know as the Sapir-Whorf hypothesis, that is the correlation between language and worldview. Arrival takes this hypothesis to a new dimensional level through linguistic determinism, the most extreme version of the hypothesis, which posits the idea that language can actually determine the way we perceive reality.

While some may feel that the film is too slow or lacks passion I would argue that the pacing is just right for this kind of thinking-person’s scifi. The cinematography is vividly intimate at times, bringing us in close to Louise’s personal joy and pain. The feel fluctuates between sterile and gravidly natural, echoing the film’s narrative tension.

With world governments on the brink of war, Louise and an International team of scientists eagerly work to interpret the alien’s language and the purpose of their visit. Will they figure it out in time to avoid disaster? Find out in the award-winning film, Arrival. In theaters now.