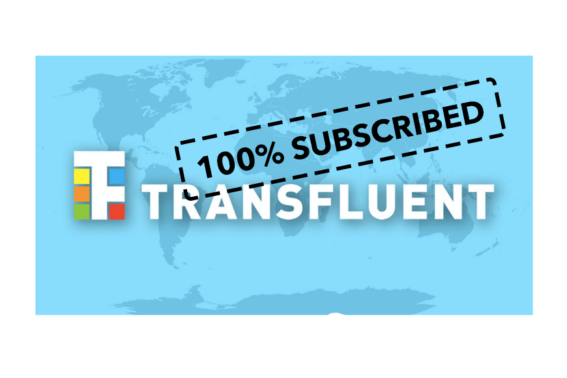 When Transfluent set out to do a public share offering six weeks ago, some people thought we were crazy. Translation industry is not exactly the sexiest investment target. A service company targeting business customers lack pretty much all of the hype-potential needed for a successful crowdfunding campaign. The obvious danger was of course that our funding campaign would not gain traction, resulting in public relations disaster and a lot of wasted time and energy.

We could have gone the traditional route and looked for VC financing, as we have done in the past, but we wanted to expand our ownership. My vision for Transfluent is to be “everyone’s favorite translation company”, and an important step towards that goal was to give everyone a chance to become a shareholder. As you may know, Transfluent is not publicly traded, so in normal times there is no way to purchase shares.

And now, less than six weeks later we can declare a victory! Our funding is now more than 100% subscribed, meaning that we have raised the money we wanted, and then some. Our business was already profitable and growing well before this, but the new funding will greatly boost our ability to grow.

We now have more than 140 new shareholders on top of the 40 we had before, making us the most widely-held privately owned translation company in the world (I have to admit I’m making a wild guess here as there is no way to know how many owners the other privately owned translation companies have… because they are privately held. However it is uncommon to have over 100 shareholders in any non-public company so I am likely right).

This investment round is historical in another way too: While we got a lot of new shareholders, about 40% of the investment was actually made by two large institutional funds, Vision+ and Avera. According to Invesdor, the company who organized our funding round, this is the first time ever that VC funds have allowed general public invest along with them on the same terms!

I am especially grateful for Vision+ who have always supported us when needed, and who are never afraid to try new exciting things like this crowdfunding campaign. The motto of Vision+ is something like “Entrepreneurs will run their companies and investors will sit in the back seat making sandwiches”. This is such a great way to put it! Without great investors we would not be here.

The funding round is still open to accommodate last minute investments. Until the end of the day, May 31, you can still invest here: www.invesdor.com/transfluent. After this deadline, the opportunity for public to invest in Transfluent will be closed. Act now!