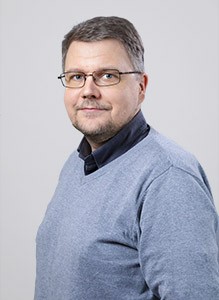 Sheena: Today I’m here with Head of Translation Services at Transfluent, Mikko Heinonen. So Mikko, tell me a little bit about your background.

Mikko: I have a Master’s Degree in English Philology and Education from the University of Tampere. I am also a qualified English teacher but have not really been teaching since the early 2000s. I have worked in a number of positions, from renting cars and making zip fasteners to doing communications at a nuclear power plant and writing game reviews.

Sheena: Wow, what a variety of experience! Your title at Transfluent is “Head of Translation Services.”  That sounds like a lot of responsibility.  What are you responsible for and what kinds of duties do you take on?

Mikko: I manage the entire subcontracting business that I brought into the company with me and take care of some direct client relationships I have built during my years as a translator. I am also what you might call a translation industry expert, in that I have worked with different companies in the field for a long time and translated millions of words, using dozens of different tools. I’ve been using my experience to offer advice to our operations and sales teams.

Sheena: What brought you to the translation industry?

Mikko: Ha-ha. It was more or less thrust upon me. I was always good at English when at school, and already did my first translations back in 1995, before even starting at university. I also did them occasionally during my studies, and when the time came to actually start thinking about a career, a friend referred me to one of the major language service providers. I worked for them exclusively for a while, mostly doing game translation, but when they hit a dry spell I started looking for other clients. Over time, that turned into me running my own translation agency, as I was getting in too much work to really cope with it alone. I did this for over 12 years before joining Transfluent in November 2017.

Sheena: How did Transfluent come into the picture?

Mikko: Transfluent was already on my radar as I like to keep up with the competition. Late last summer, I realized that I had some mutual friends with CEO Jani, so I arranged a meeting with him. My intention was to offer subcontracting, but it soon turned out that we might be able to do more together. I had been doing the subcontracting side of the business for a while and was interested to try something else. He made me a good offer, so I came and brought my entire team of freelancers with me.

Sheena: Well, we certainly appreciate it! More talent means better service for our clients. Now that you’re here, what are a few goals you have for making Transfluent the best we can be?

Mikko: I’m a “quality first” type of person and have a history of fixing accounts that are doing badly. I also like to create streamlined process models that allow people to do their best work with minimal distractions, and ones that are not overly dependent on individual expertise. A lot of this I learned during my time in the nuclear energy industry, which is very peculiar in this respect, but many of the same things also apply to translation.

Transfluent is a great, agile company that serves particular needs very well. My job is to expand our capabilities so we can do even more.

Sheena: Thanks for that! So, now that we know about your work, what do you like to do in your free time?

Mikko: Ha-ha, what’s free time? I’m one of those people who have a hard time sitting down. In addition to translation, I run a couple of websites, act as editor for two hobbyist magazines, help with the Finnish Museum of Games (which I also helped to crowdfund) and create YouTube videos. And have two children. So my free time consists of turning on Netflix and watching half an episode of something before I fall asleep.

Mikko: I’m into vintage video games and automobiles, however usually ones others don’t obsess about. I care about the odd stuff that is threatened by extinction, such as arcade machines, Sega game consoles and slow 1980s American cars with plastic faux wood interiors.

With two of my friends (one of whom is also my brother), we launched a video game collecting site known as Pelikonepeijoonit in 1999. It was initially intended to be a virtual museum for our own collection, but we always had something bigger in mind. One thing led to another and in 2016, we were able to join forces with the City of Tampere to establish the Finnish Museum of Games at Museum Centre Vapriikki. It was the first museum in Finland to run a crowdfunding campaign and the exhibition relies heavily on our collection of hundreds of systems and thousands of games.

Sheena: That is so amazing! I’m a gamer from back in the days of the arcade so I’ll have to make a visit to the museum someday!

Well, we are super excited to have you on board and I can’t wait to see how things get even better now that you are with us at Transfluent!